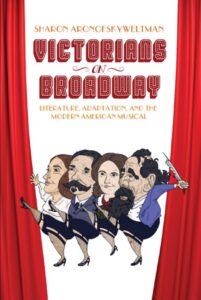 Victorians on Broadway is a wide-ranging interdisciplinary study of live stage musicals from the mid- to late-twentieth century adapted from British literature written between 1837 and 1886. Investigating musical dramatizations of works by Charles Dickens, Charlotte Brontë, Christina Rossetti, Robert Louis Stevenson, and others, this book considers what cultural and interpretive work adaptations such as One Touch of Venus (1943), The King and I (1951), Oliver! (1960), Sweeney Todd (1979), The Mystery of Edwin Drood (1985), Goblin Market (1985), Jekyll and Hyde (1997), and Jane Eyre: The Musical (2000) accomplish when they premiered on Broadway and now; likewise, it interprets Victorian literature and culture through the Broadway musical, focusing on the reciprocal illumination of both source text and adaptation. Each chapter considers the adapters’ choices in understanding the originals, using unpublished archival materials and personal interviews with actors such as Rowan Atkinson and composer-lyricists such as Stephen Sondheim. Examining not only these musicals but also their rich genealogy of prior adaptations (to the melodrama stage and to early film and intermediary cinematic or television versions) demonstrates the complexity of their heritage while revealing how fully for Broadway, “Victorian” often means “Dickensian” even when the source text is not Dickens.

Sharon Aronofsky Weltman, William E. Davis Alumni Professor of English at Louisiana State University, is author of Performing the Victorian: John Ruskin and Identity in Theater, Science, and Education, among other works.